A downloadable game for Windows and macOS

NB: If you bought the game through Kickstarter, your download key takes you to a different page to download the Kickstarter version of the game (which has the 18+ patch).

"There are many emotions, from the highest of highs to the lowest of lows, all of the emotions regardless are portrayed beautifully in this VN to immerse yourself as if you are looking through the eyes of the protagonist. Highly recommended VN for story lovers! <3" - FlareBlitzed, YouTuber

"Among the VNs I've played in the past, missing time exceeded my expectations. It's not only the story telling that made me crave for more, but how the characters were portrayed. I highly recommend this to people who are an avid fan of horror genre." - Truck-kun, Superbacker

“We all have a little darkness inside of us.”

It’s always so easy to bury secrets in small towns. Especially when the authority turns a blind eye. Just as you moved back to your childhood town, an unfortunate chain of events leads you to a series of mysterious cases buried away by the locals. Your friends seem just as clueless as you are … Or are they? Guided by only the vaguest clues and instinct, your task is to find the missing pieces of bizarre cases that seem to involve more and more people you know as you go along. As time progresses, you must choose: Either to stay ignorant, enjoy your last year of High School blissfully and hope for the best, or dive head-first into detective mode and claw your way out.

Missing Time is all about making connections between the most important details of your life, and to never miss any moment that can define or destroy memories that will follow you always. Heavily story-driven, Missing Time is a beautiful concoction of horror and utsuge, that will surely leave an impression no matter the decision you make. 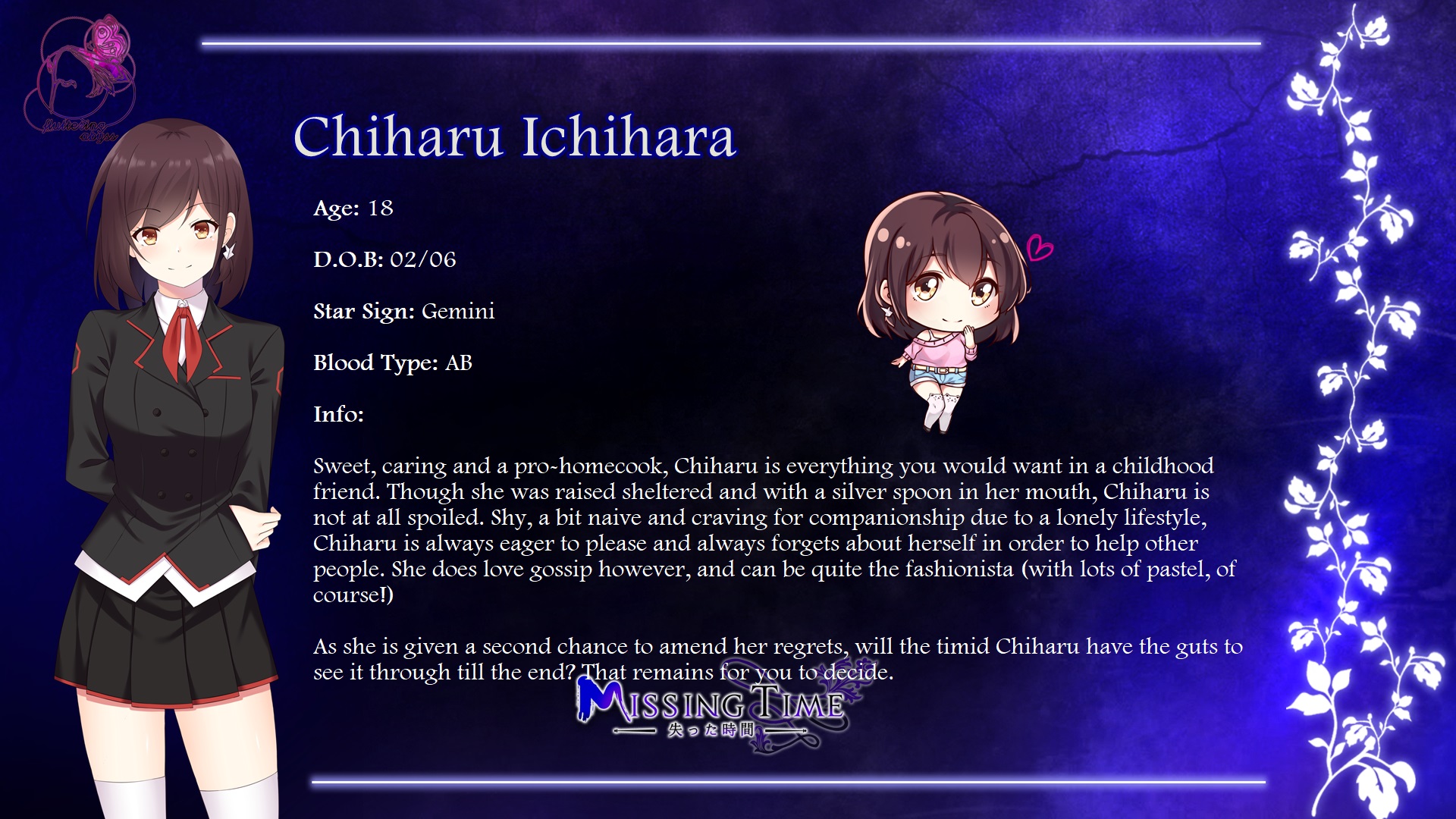 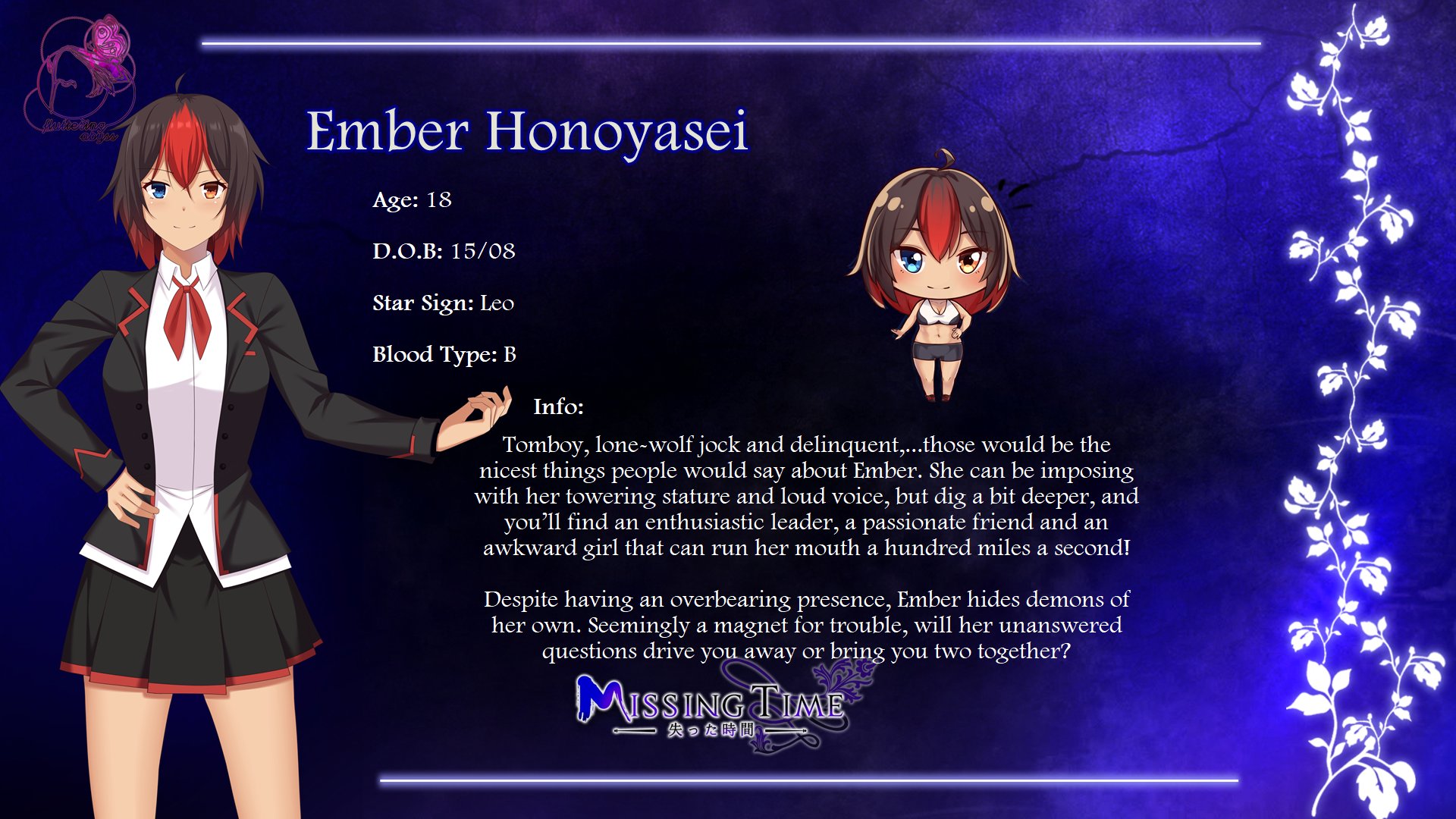 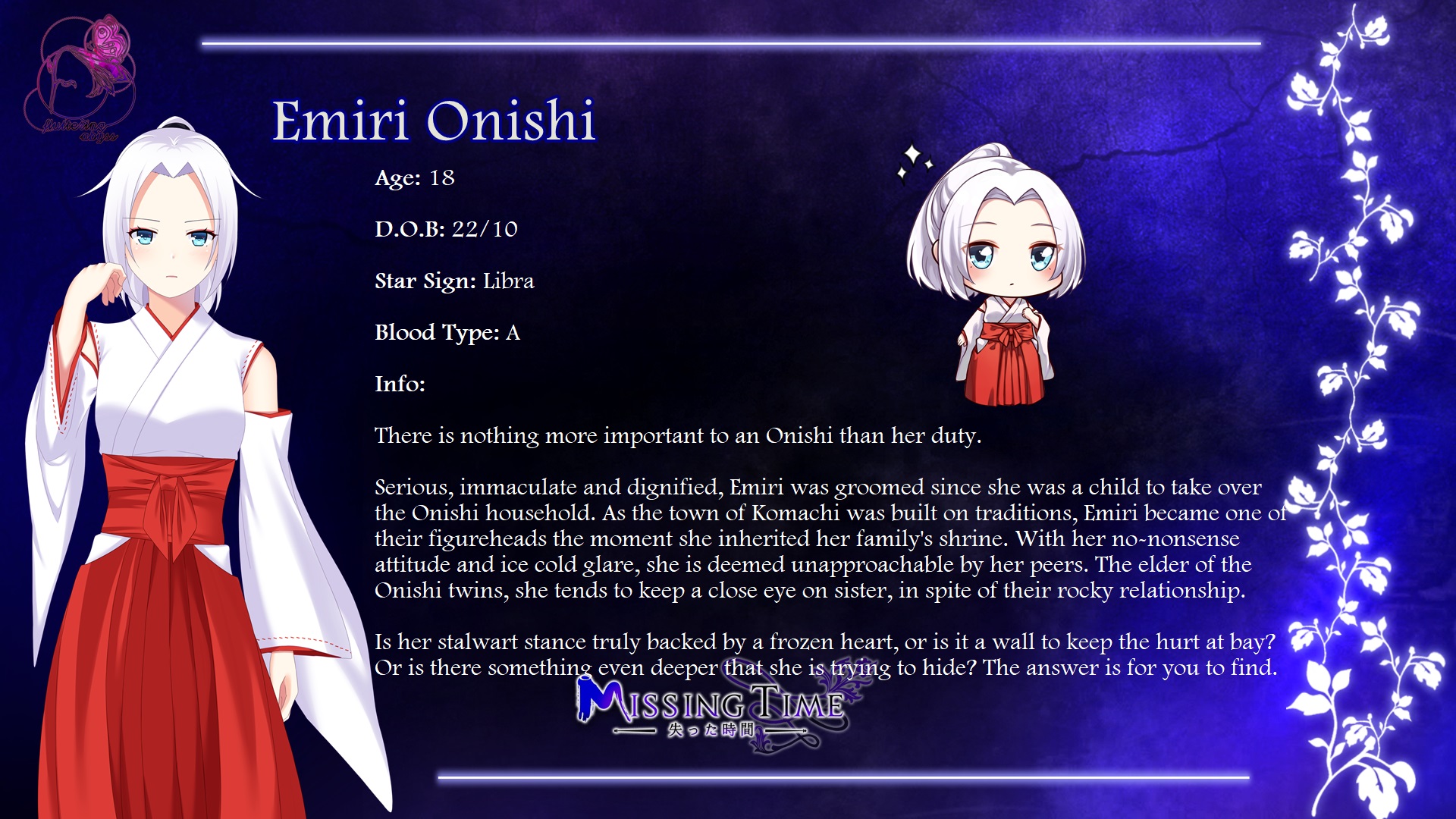 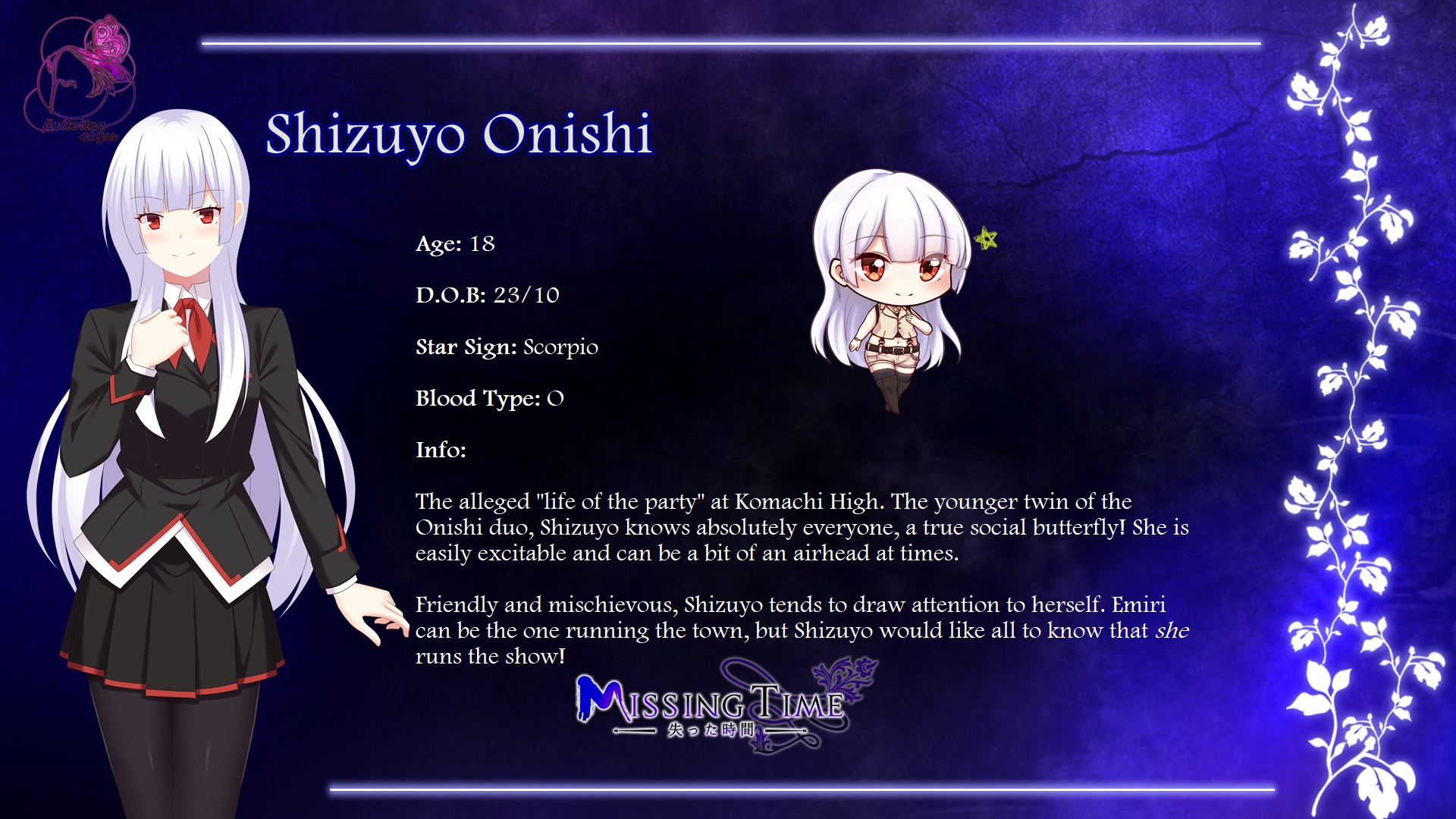 Just finished my first playthrough, got Chiharu's bad ending and... well, that was just awesome! Really worth the coin, man!

BTW, would you please satisfy my curiosity and tell me, was the original concept of this game somewhat inspired by Higurashi No Naku Koro Ni?

So glad you enjoyed the game!

The original concept of the game simply wanted to stay true to the utsuge genre.  Our writer was most inspired by Elfen Lied, XXXHolic and Corpse Party around the time of writing this game, so a few elements were drawn from those series :)

Mpf, now I'll have to storm my garage and  rummage through dusty boxes looking of my copies of XXXHolic... hell, I'm allergic to dust! That's the price for knowledge I guess...

All jokes aside, so long! May your future projects (both virtual and real life) be as full of passion as this one!

Will the adult patch ever be available to non backers?

Hello here. I have Steam version. How to buy / download ONLY 18+ patch? Re-buy the game again having Steam version would be insane. Thanks

Hey, unfortunately no. Kickstarter backers receive a secret download link that has the 18+ scenes, as it was a limited time reward.

Hey wrld_ctzn, unfortunately no. Kickstarter backers receive a secret download link that has the 18+ scenes, as it was a limited time reward.

So - There is no way to obtain the full 18+ version, no matter what you pay? It was only a time-limited offer for backers?

Hmm.. That makes me rethink buying this VN. Too bad...

Yeah, unfortunately it was a limited time event. The 18+ scenes (1 per character) are definitely not required to enjoy the game though.

Ok - Thanks for clearing this up. I am certain these scenes are not needed, but it still gives a bit uncomfortable  incomplete feeling. Well - Let's say I think it over...

Kind of have the same feeling.  Not a kickstarer backer for this particular game (you can't know about every kickstarter project and back everything).  Would have hoped maybe a delay on public availability of an adult patch after kickstarter backers had their value and a pay extra option to those who hadn't backed would be the right way to go for the extra adult content.
Think I'll put this on my backburner list of games to think about, I have so many unplayed games

Hi hi, is Mac version going to be released on steam? Because the preview of one of the routes here isn't working for me. The VN seems good but well, I only own Mac

Some of our Mac users have found they can play it on Steam's Win version.

"If the game does not start from the Steam app because it says it can not find the file ‘/Users/.../Game.exe’, use the Terminal to go to the specified folder and do ‘open game.app’."

Steam will offer refund for in-game purchases within any Valve-developed games within forty-eight hours of purchase, so long as the in-game item has not been consumed, modified or transferred.

Is this a known problem with a solution?

(I can boot into Windows if I must. It's just convenient to run it under Linux if I can.)

Some Linux users are still finding an issue with launching the game. At this time, we highly recommend playing on Windows if at all possible.

Hey is it me or does the "log" button not work or mouse scroll up not work when trying to read through the log or see past conversation? I have the kickstarter exclusive btw

Log is glitched, always starts at the top of scene. We are unable to fix this as it's a Visual Novel Maker built-in.

oooh nvm, I just played the steam version and its fine. Sorry I wasn't talking about the top of scene bug. I was refering that the itch version of the visual novels log button doesn't work at all. You can't actually press the button, it does nothing

No matter which discord link I try it seems to have expired, how can I join? I wanted to ask a couple of questions.

Hi there. We've updated the link on our Itch.io and Kickstarter. Try this: https://discord.com/invite/F9f9Hb4

I played through the free version, there was some bugs that were progress breaking and I had to do a new game and skip through where I was to be able to progress (I don't personally mind, but it can be annoying for some people. Maybe those problem are not in the full game? I saw there was a email for bug report, but I wondered if you want reports for the free version too?)
The story and the characters are really good, I really enjoyed it and I will buy the full version soon, my only complain is that the (spoiler?) reveal at the end was kinda underwhelming and I was hoping for something else, but I still enjoyed the game overall
The visuals are amazing, even if the CG art style can be a bit inconsistent, probably because they were drawn by different people?
The music is fun and fitting.
Overall the story is well written, there were a few moment I felt the flow of the conversations were unnatural, but not enough to take me out of the immersion.
I really enjoyed it and can't wait to play the full version, I might update my comment after I do so.

Hi crousibat, yes, please report all bugs by emailing us! Many of our Kickstarter backers have played the full version with little issues, so I wonder if it might be a problem with Chiharu's Route only (since many scenes were deleted to make the one-character route game). Did you get through all 3 chapters of Chiharu's ending? There's an early end at the end of chapter 1 which may take a few attempts to bypass.

Hi, I'm writing you a email with details about the bugs. I did finish the third chapter, I wrote in my email the reason I felt that way about the ending, hope this will help.
I bought the full game and started playing it, I will probably make a full review on my blog after I finish it. Thank you for making this game <3

Bro you did just fucking not do the ending in this update like that bro, damn. really? shit thats sad man, like i was kinda liking chiharu bruh, that shit was so unexpected but i mean, thats maybe kinda the point but like damn. rip chiharu for now i guess?

You can save her (in all versions, including the Demo).

yeah yikes so far after 3 runs not able to yet

Come to Discord to talk to fellow players who have also gone through the same pain: https://discord.gg/zryjNYT

Can't start the game on macOS Catalina. Help please, the game looks so good but if I can't try it pledging is not an option for me.

Yea I am on a Mac and I can't play the game too.

We've uploaded a new version of the MacOneEnding. If this still doesn't work, our team will meet up tomorrow (online) to discuss this.

I tried again with the new one. It still does not work, because it says that the game can't be found for some reason. Thank you for looking into it anyway, I still backed the game because it looked interesting.

Do we have progress here? I've downloaded OneEnding yesterday. First I wasn't able to start the game.app at all. I have been able to fix this with "chmod +x...". Now the game starts, but no window opens. So still not playable at all. Please help

One Ending for Linux is missing T_T

One Ending for Linux added! (unfortunately it looks like Butler overwrote the demo in the process), let us know if there are any issues!

I can't remember of any other moment that i felt SO hyped to play a novel. I believe that you guys will do an amazing job, and i'll gadly support you guys with all my might !

Thank you for your love and support!

is it going to come to the Macs

I tried downloading it but its not going through

says:This title is hosted on an incompatible third-party website

went through this time can't wait to play it

Can you specify whether the protagonist is male, female, player-selectable, or deliberately ambiguous?

It doesn't seem to say anywhere here or on your kickstarter page.

Is there a canonical name for the protagonist?

Thank you so much! 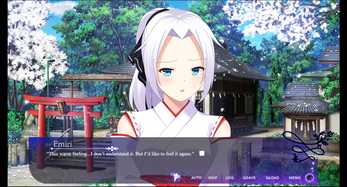 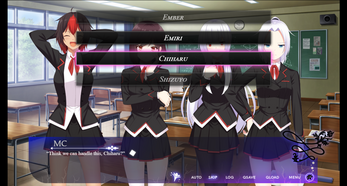 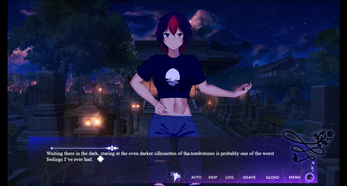 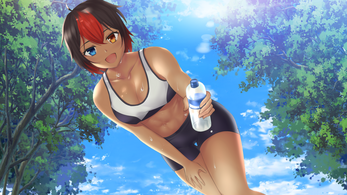 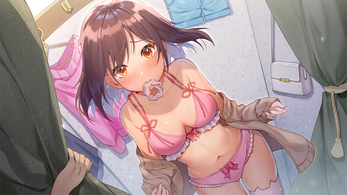 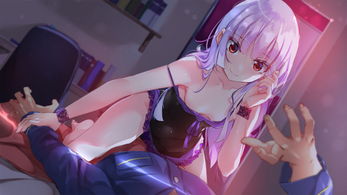